Firstly, apologies for the long intermission…this blogging and writing hasn’t been my strong suit, like I said, not a man of many words; so, sorry, not sorry…

To continue from part ii, i’d like to start with the tentative schedule we were given at the beginning of the seminar which changed a couple times while we were there; adding some more time for lecture and discussion while rearranging free time. 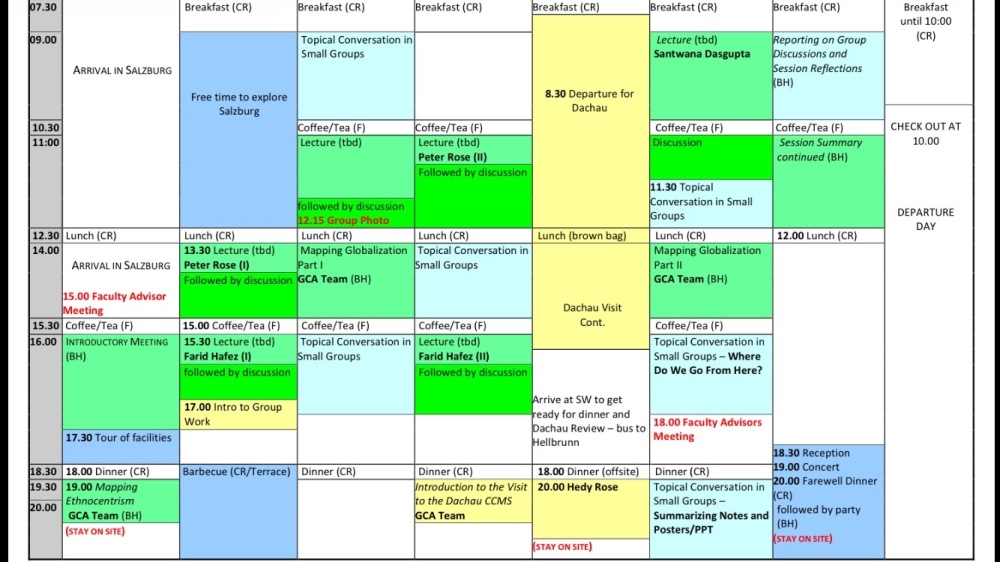 I definitely wouldn’t consider myself a morning person, but I started my days at 6-6:30 in the morning, to wake up, shower, and get ready; to be ready for breakfast at 7:30 when it was first served (continental style) but wanted to make sure to get a fresh pot of coffee and not have to share it, haha. I was definitely one of few who took this option.

I felt very fortunate to be apart of this program, as the people we heard from are highly achieved people in their fields, and spoke at this seminar to help spread their message and wisdom, to help us open our minds to a greater dimension.

Jochen Fried is the president and CEO of the Global Citizenship—which recently became independent from the Salzburg Global Seminar—who was the director  of Education at Salzburg Global Seminar, where he worked since 1998. He’s worked in more than twenty countries on behalf of of national international organizations. He received his doctorate in German literature from Düsseldorf University! Go Dortmund!

The COO of the program is Astrid Schroeder who holds an MA in North American studies, modern history, and theater arts from Free University from Berlin’s John F. Kennedy Institute. Prior to joining GCA Schroeder was a Program Director for the Global Citizenship Program at Salzburg Global Seminar, where she focused on student sessions, program development and relationship building; making her transition as COO to GCA so practical! Astrid shared one of, to me, the most touching stories, as her father was brought up in the hitler youth and served during WWII.

The thirds member of the GCA team was David Goldman. He started of the Seminar with a lecture on mapping, where he painted a clear picture of perspective—which would be an  them carrie out throughout the seminar. Goldman is the director of Program Development of the GCA. Before GCA became independent, Goldman worked with GCP, which he co-developed and since tis inception in 2004, focused on working with students. faculty, and administrators from a wide variety of partner colleges and universities. Goldman holds a BA in history and African studies and an MA in hisoty, form Colorado college and University of Salzburg respectfully.

Wold Map according to US

notice how we’re in the middle

These are just two example, but do I really need to elaborate??

We all have our own perspectives, and as mentioned in overview part i, it’s important to put that in check and look at the work from a different angle.

Xenia is a researcher with the SIPRI Armed Conflict and Conflict Management Programme, who’s currently working on the New Geopolitics of Peace Operation Initiative (which aims to enhance dialogue and understanding about the role that emerging global actors play in shaping the future of international conflict management). Xenia holds an MA in International Policy Studies, Conflict Resolution Concentration at Monterey Institute of International Studies, and a BA in Political Science from Hunter College. And let me just add, Xenia is a little fire cracker who speaks freely and will let you know what’s what; very refreshing and energetic to have a speaker, who joined the teaching staff in 2012; first joining as a student in 2007.

The speaker which I feel opened the room to the most discussion was Farid Hafez. Farid is a researcher at the department of Political Science at the University of Salzburg. He received his MA and PhD in political science from the University of Vienna, where he currently resides, and a MSc in civic education. Hafez spoke to us on the topic of Islamophobia which is one of the hottest topics, I feel, due to 9/11 and terrorist attacks we’ve been hearing about around the world, which everyone is quick to point their finger at the muslim world.

When Hedy Rose spoke to us, I think it hit me the hardest. Hedy was born Hedy Cohen in Amsterdam and was at the tender ager of about seven when World War II broke out. For those of you who actually read “The Diary of Anne Frank” you can imagine how this lecture went. In short, she lived in another family’s basement for four years during the war while not truly knowing what was going one, at such a young age, how could she?? I felt very blessed to have her share our story with us, and I’ll never forget it.

We also heard from Peter Rose, Hedy’s husband. I don’t even know here to start with Mr. Rose, he’s a very accomplished man…maybe I’ll just throw out some bullet points and see how that goes:

He’s also been a visiting fellow at:

He served as Fulbright Professor in:

Mr. Rose is also a published writer and these are his latest books:

Last, but not least, and not in order, Reinhold spoke to us in unordinary fashion. Reinhold began his lectures with jazz music playing, a jazz musician himself. I love walking into the room and preparing for lecture with jazz music coming through the speakers! He was associate professor of modern history at the University and Salzburg and was visiting professor of United States history at the University of of Minnesota, Franklin and Marshall College, along with, Lancaster, Penn, and the University of New Orleans. Reinhold was awarded the the Tolerance and Diversity Prize from the Embassy of the United States in Vienna.

I know this was a long introduction to who we heard and had the pleasure of learning from, but it’s still just scratching the service. This doesn’t include the faculty advisors, guest students (previous fellows of the program) and students from SJSU, USF and EKU (San Jose State University, University of San Francisco and Eastern Kentucky University). We were students of a wide range of backgrounds, an level of education…from undergrads to doctorate students. Which was pivotal when it came to breaking up into groups and using what we learned from the lecture to help guide us!